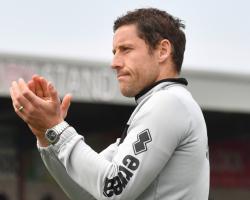 Brown, 40, took over as caretaker boss in December following the resignation of Bruno Ribeiro, but failed to save the club from relegation to Sky Bet League Two

The Valiants have also named David Kelly and Chris Morgan as assistant managers and Darren Wrack as chief scout.

"Port Vale Football Club are pleased to announce the permanent appointment of Michael Brown as first-team manager with immediate effect," the club said in a statement on their official website

Sunday's goalless draw at Fleetwood sealed Vale's relegation to the fourth tier and the announcement comes a day after Norman Smurthwaite quit as chairman and apologised to fans for decisions which had "seriously damaged our club."

Vale chief executive Colin Garlick said: "The appointment of a manager is in my opinion the single most important decision that a club ever makes

"We believe that it is important for us, at this time, to confirm Michael's appointment along with his backroom staff to allow them the maximum time to prepare for the new season

"I very much look forward to continuing to work with Michael and his staff as we look to prepare for the challenge ahead."

Former Sheffield United, Tottenham and Leeds midfielder Brown joined Vale as a player on a one-year contract in July 2014 and was also appointed reserve-team coach