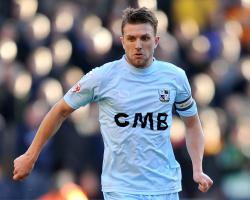 Port Vale 6-2 Hartlepool: Match Report - view commentary, squad, and statistics of the game as it happened.Williamson leads Vale in cup routPort Vale striker Ben Williamson scored a hat-trick in the space of 10 first-half minutes to lead his team to a 6-2 rout of Hartlepool in the Capital One Cup.Williamson struck his opening goal in the eighth minute of the first-round tie when he turned the ball in left-footed from six yards after Ryan McGivern's shot had proved too hot for Pools keeper Scott Flinders.Hartlepool drew level two minutes later with Jonathan Franks cutting in from the left flank and striking a right-footed shot from 35 yards which beat Vale keeper Sam Johnson low inside his right-hand post.But Vale retook the lead after more questionable goalkeeping in the 14th minute

Williamson's firm right-footed shot from the left corner of the six-yard area squirmed past Flinders at his near post.An unmarked Williamson completed his hat-trick in the 18th minute with a firm downward header from six yards after Chris Birchall had crossed from the right.Vale went close to adding further goals in a one-sided first-half against a struggling Hartlepool side.The visitors did improve at the start of the second period and reduced the arrears in the 59th minute

Chris Robertson fouled Sam Collins and Neil Austin fired the resulting penalty low inside Johnson's right-hand post.Vale restored their two-goal cushion two minutes later when substitute Michael Brown scored with a combination of his head and shoulder from six yards after Mark Marshall crossed from the left.Tom Pope netted Vale's fifth in the 74th minute with a right-footed finish from two yards after Flinders had failed to hold on to a shot from Louis Dodds.Pope completed the mauling six minutes from time when he expertly guided a header into the far corner from a tight angle after Chris Lines had crossed from the right